Africa seems to be a fascinating continent. A great diversity of regions and more than 1000 cultural units coexist; some of its civilizations are the oldest on the planet. And, how could it be otherwise, when it comes to celebrating their weddings they continue with ancestral traditions.

With wedding ceremonies that sometimes last a few days, due to their complex preparation, the inhabitants of such a beautiful continent conceive of the family as the basis that maintains unity throughout society.

Join me because today we will talk about a fascinating topic that will surely leave you speechless; Let’s talk about African weddings.

Something that I love about African weddings is the tradition that permeates every moment of the celebration. In fact, it is said that if you are in Africa and want to get married, you should do it with all the traditions that a ceremony like this implies. Because if you don’t, your wedding will have no future. How bad to start like this, right? 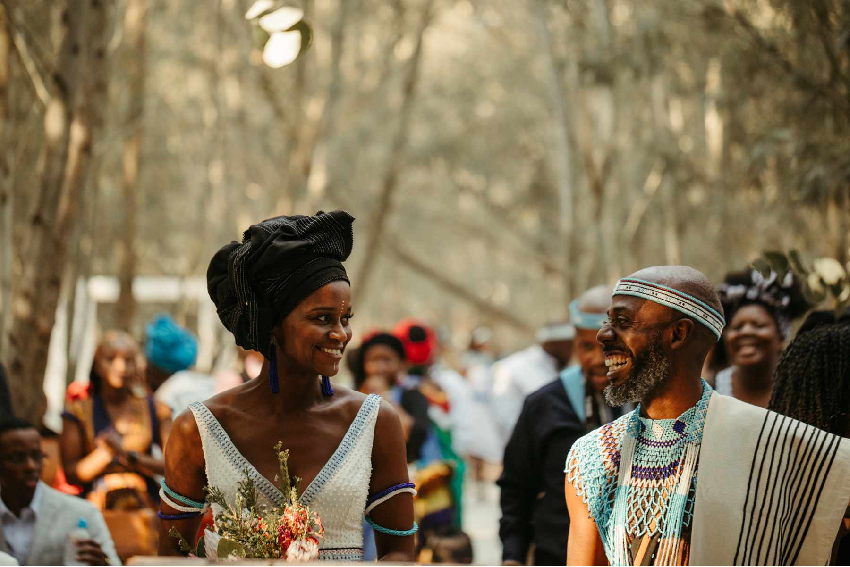 All the components of an African wedding, the clothes, the food, the flowers, and the decoration, are chosen with great care. In fact, preparing a wedding in the third largest continent in the world can take weeks, and even months, for the families of the bride and groom.

In any part of the continent, the fact of getting married wearing traditional clothing is much more important than the civil ceremony itself.

The fabric used in the clothing of both the bride and groom and the guests is called Kita (you can also find it with the name of kente; it depends on the country where you are. Kita is called by the inhabitants of the Ivory Coast, while it is kente for the natives of Ghana).

It is a handmade fabric with a simply majestic result. It is printed with very striking and symbolic drawings. Formerly, the Kita was a cloth that only people of higher social rank used. They dressed in this prodigious fabric when they had to attend a ceremony of great importance.

Nowadays, however, it is easy to find this fabric in African markets. You can find it in all the colors you can imagine, but be careful, each color has a different meaning. It can represent from joy to death; so, I advise you to inform yourself well of the meaning before buying it.

The bride’s attire is made up of four pieces of clothing: the blouse or Buba, the skirt or iro, the turban or gele (this part of the bride’s wardrobe is made of a fabric called Aso Oke), and the shawl or piece. . They usually choose white, or also ivory.

If you are thinking of getting married with African wedding inspiration, you have to pay close attention to your wedding decoration. You cannot forget a series of elements that must be present because of the meaning they have and everything they symbolize.

Kita cloth, or kente, is also used as part of the decoration. We can see it on tablecloths, flower arches, and backdrops, among others. Aso Oke fabric can also be used, the same one that the bride wears in her gele, or turban.

It is important that on the banquet tables there are objects such as baskets, bowls, or kitchen glasses. This symbolizes union, shelter, and food. Like the swords with the shield; They are symbols of fertility and marriage.

Another element that should not be missing in the decoration of an African wedding is brooms. They show the cleanliness of health and wellness. Finally, they also have in mind the holy book, the Bible or the Koran, as a symbol of truth and the power of God.

As for the bride’s bouquet, it is traditionally made up of grains of uncooked wheat or rice. But, there are also many more options. They can carry flowers, yes, white, a symbol of the ceremonial rites. Although there are more daring and opt for striking colors, including black.

Not all weddings serve the same food, given a large number of ethnic groups in Africa. However, there are a number of dishes that are common to the entire continent.

Cornbread fritters, ginger soup, and fried fish, along with green beans, rice and bananas are the most typical foods in a traditional African wedding.

However, as I told you above, you can find much more variety of food, depending on the country or ethnicity of the wedding. For example, in South Africa, it is common to eat fried chicken, mashed potatoes, and gravy. For dessert they really like cookies.

Apart from the food of the banquet, in African weddings, there are also a series of symbolic foods that should not be missing from the table. Some are eaten, and others are only there to represent their meaning:

Cola Nuts: Symbolize fertility and good health. It is food often consumed by the guests of an African wedding.

Wine: an essential drink for everyone who attends the wedding. It symbolizes the union of the blood of the two families.

Wheat: symbolizes fertility and the gift of life and the earth. It is mainly used for decoration.

Pepper: it is used for hot family moments.

Bitter herbs: It is a mixture of herbs that are made to avoid pain in marriage.

Water: Demonstrates purity. It is used both to decorate and to consume it.

Honey: I eat like the sweet love between spouses.

In a continent as large as Africa, it is normal for all kinds of religions to coexist. In the north of the continent, Africans profess Muslim religions and traditions. Meanwhile, further south, Christians, Hindus, and Jews coexist.

Regardless of the religion professed by the bride and groom who decide to get married, there are also wedding celebrations that preserve many traditions of the ethnic groups to which they belong.

And this is what I want to talk to you about now. The diversity in the ways of celebrating a wedding varies greatly from one town to another. However, in this variety a series of customs and ways of understanding and doing things coexist:

Although polygamy is a common practice in many African societies, the truth is that most marriages are monogamous. Initially, polygamy supposes an economic relief for the man; by having several wives he increases the workforce in the tasks of agriculture.

However, the number of mouths to feed is increased. Many families have to give their daughters in marriage, in order to pay the debts with the wedding dowry.

In Africa, being polygamous is a symptom of social prestige. The first wife gains social importance as her husband de Ella marries a new woman. In addition, they are also offloaded from a large number of tasks, not only at home but also in the field.

Also, the fact of acquiring a new wife can be a purely sexual motive for the husband. There is a belief that speaks of the abstinence of women in sex during the first two years of a baby’s life; this is so to ensure the quality of breast milk.

Polygamy can be a risk; sometimes it happens that the children of the last wives barely receive a decent education. And all for a matter of ranks.