In Japan, as in other parts of the world, marriage between a man and a woman meant the union of two families. The vast majority of weddings were celebrated as a marriage agreement to unite different clans, and although today it has changed a lot, a Japanese wedding continues to preserve that traditional aspect so characteristic of eastern countries.

A wedding in Japan is such an important event that the financial outlay is enormous. Although the Japanese tend to be quite austere about other celebrations, with Japanese weddings they throw the whole house out the window and celebrate in a big way.

Discover how the marriage ceremony is lived in Japan, how they usually celebrate it, what changes have occurred in recent decades, and other Japanese curiosities related to weddings that will surprise you.

If you are also going to attend a wedding in Japan, learn about their customs and get ready to live this unique experience in the Japanese style. Take note of what it’s like to get married in Japan with photos, images, and videos!

The way we see Japanese culture in the West is very different from reality today. We can come to think that in Japan young people still marry for convenience, through marriages arranged by their families, and that they do not really do so for love.

Nothing is further from reality. More and more Japanese people are leaving these archaic traditions behind, and they even prefer not to marry if they are not really in love. The Japanese, as cold as they may seem to us, also prioritize love in their relationships. 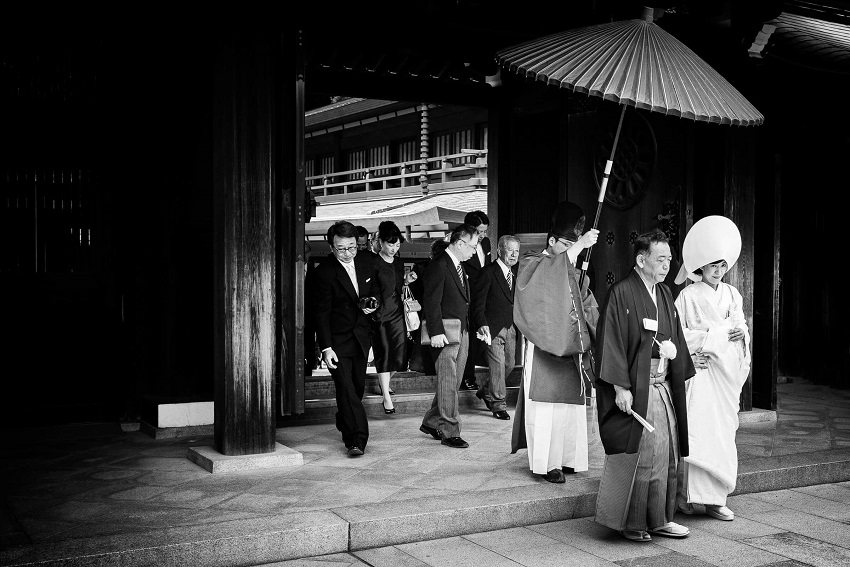 A Japanese tradition that is still valid today is the thought that a man must be married before reaching the age of 30. This fact is practically an obligation in most rural areas of Japan, where the traditional culture continues to be maintained.

When a man or woman approaches the age of marriage, or middle age, called reiki, if they are not yet in a stable relationship, their family will rush to find them a life partner.

In some areas of Japan, the tradition of the naked is still followed, which consists of parents acting as ‘Celestina‘ to find a partner for their sons or daughters, or what is known as a marriage of convenience.

When the parents believe they have found a compatible partner, the omiai is celebrated, which is the ceremony in which the parents and the future couple participate. If the two boys like each other, there will be more meetings between them, until the wedding is arranged.

This ritual is already being lost in Japan, and very few young people accept that their parents look for a partner to marry. Although in many Japanese dramas it is still seen as normal in wealthy families, it is a disused tradition.

When a couple is in love and decides to get married, it can be done through several different types of ceremonies. As in the West, legal marriage is done just by signing a paper, regardless of the type of religious ceremony that is done to celebrate the union.

There are Japanese who are more practical and only sign the marriage form in the koseki, the civil status registry of Japan, together with two witnesses.

Of course, the vast majority also accompany it with one or more religious celebrations, which can be in the traditional style, in the Western style, or both together.

Very few Japanese are Christians, so the celebration of a Western-style Japanese wedding is more than anything a fad, or because some of the spouses are of Western culture. For the Japanese, these weddings are more exotic and much cheaper than traditional weddings.

The bride and groom dress in the typical costume at Christian weddings; he is in a tailcoat, and she is in a white dress, which is usually extremely floaty dresses.

The Catholic wedding ceremony is celebrated together with the whole family, friends, and co-workers, and then everyone enjoys the food during the reception.

Lately, more themed weddings are being held, for example, from the Pokemon series. These weddings have an official license or certificate and Pikachu as a witness.

It is common for the bride and groom to change their clothes during the reception, as is the case with the traditional Japanese ceremony. In Japan when a couple comes together it symbolizes a very important change in their lives, and for this reason, it is important to change clothes as a sign that they have started a new stage together.

What Changes Have Occurred In Japanese Weddings?

Although the main religion in Japan is Shintoism, weddings are not usually a religious celebration that is marked by the beliefs of each person.

In fact, throughout the history of Japan ancient wedding celebrations have been changing according to trends. While at the end of the XIX century the ceremonies were Buddhist ( butsuzenshiki ).

Whatever the central reason for the wedding, in Japan weddings, are not usually religious ceremonies. They consist of a celebration together with the whole family and friends, in which the couple chooses the style they like best for the occasion.

It is very common for the bride and groom who can afford it to have two different types of weddings. This is the case of the Nekojita YouTubers, who made two types of celebrations to join in marriage:

For this reason in Japan, the wedding business moves a lot of money and is so important. There are countless agencies that are dedicated to organizing a wedding adapted to the demands of each couple, which can be as varied as there are different people in Japan.

You may also be interested in 8 wedding traditions in Latin America: forget about throwing the bouquet