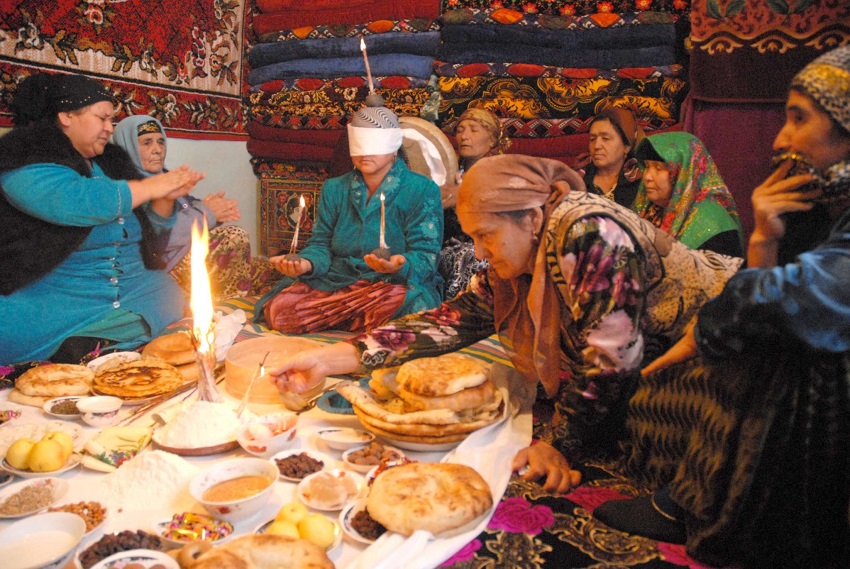 The Pilaf Of The Morning

The custom of the morning pilaf concerns the days of marriage and funeral celebrations (which take place 20 days and one year after the fact). The wedding organizers set the date of the morning pilaf and invite the families of the newlyweds, relatives, and neighbors. The evening before the morning pilaf the wedding planners have to peel the carrots. For this reason, relatives and neighbors are usually invited to lend a hand. The morning pilaf should be ready for the end of the first-morning prayer. The first participants of the morning pilaf should be the people who completed the morning by praying (Bomdod namozi). The sounds of musical instruments herald the start of the party. Guests take their seats and after completing the inaugural ceremonies and prayers they begin to be served. Plates with pilaf are served at each table. After eating, the plates are collected in a dedicated space. This pilaf lasts a maximum of 2 hours. The difference between the morning pilaf for marriage and for a funeral is that the imam, in the second case, recites a prayer and remembers the deceased person.

The cradle rite is a large festival dedicated to the ancient tradition that has existed for a long time and still remains one of the most common in Uzbekistan today. On the fortieth day after the birth of the child, the relatives of the mother bring the cradle (in Uzbek “beshik”) sweets, toys, and everything necessary for the newborn. According to tradition, while the guests have fun and eat in the children’s room, women and the elderly swaddle the baby and put it in the cradle and then gifts are offered to the baby.

Men’s clothing: The men’s national dress is a padded dress in Uzbek “Chopin”, tied with a handkerchief, the traditional headdress is called “Tubeteika” (a kind of oriental hat). Thin leather boots cover the legs, “Kuylak – Ashton” is the shirt with the straight cut. “Ashton” – are the wide men’s trousers, tight at the bottom. “Chopin“ – is a stuffed caftan. On the sides of the caftan, there are cuts for comfort when walking. Headdresses are called tubelike, kalpon, kallapush.

The traditional women’s costume is a tunic type dress with a simple cut made of silk and wide trousers, the typical party clothes are made in “atlas” fabric decorated and sewn with gold. The women’s headdress consists of 3 elements: skullcap, handkerchief, and turban. Certainly, for Uzbek women, an indispensable addition to the costume is gold or silver jewelry.  Even the embroideries on clothes have their own magical or practical meaning. In the past, the social status of women could also be understood from the drawing. For example, the prevalence of shades of blue and purple in the female dress indicated the high social position of the husband, instead, the green color was often used by peasants and artisans.

The shoes are called “marks”, a beautiful boot, with a soft, flat sole without heels. They are very comfortable and that is why they are still widely used today.